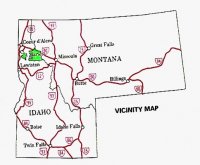 The Idaho Panhandle National Forests comprise about 2.5 million acres of public lands which lie within “the panhandle” of northern Idaho and extend into eastern Washington and western Montana. Northern Idaho is about 20 percent farmland and 80 percent forested. The IPNF administers approximately half of the total forested acres. One-fourth of the forested land is owned by small woodland owners; the remainder is owned by industries or other govenment entities.