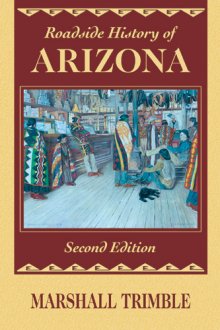 Gen. William Tecumseh Sherman visited Arizona in the summer of 1880. A promoter made the mistake of asking him what he thought of the place.

“Too damn hot and dry,” Sherman declared.
“All she needs,” the promoter said soothingly, “is less heat, more water, and a few good citizens.”
“Hunh,” Sherman said. “That’s all hell needs.”
(From Roadside History of Arizona)

The last of the lower forty-eight to gain statehood in 1912, Arizona now tops lists of the best places to live and visit. For the history behind that reversal, join Arizona’s official state historian and beloved ranconteur Marshall Trimble on the state’s highways and byways.

Along the way meet Fathers Eusebio Kino and Francisco Garces, Non-Assessable Smith, Ned Beale and his camels, Nellie Bush and her steamboats, “Great Western” Sarah Bowman, and the Navajo code talkers. Find out why Why’s called Why; where Arizona’s Civil War battlefields are; what happens at the Zuni River Reservation, where no Zuni live; and the possible whereabouts of the Lost Six-Shooter Mine.

From Fredonia to Naco, Oatman to Show Low, Ganado to the London Bridge, visitors, newcomers, and old-timers alike will delight in this classic of history and travel, originally published in 1986, now updated, expanded, and redesigned.